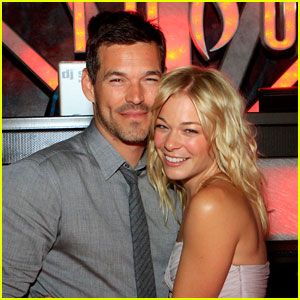 Hollywood couple watchers and divorce attorneys in Pasadena saw this one coming: Country singer LeAnn Rimes and actor Eddie Cibrian told 40 guests that they were coming to an engagement party for the pair at a private home in Malibu, Calif., on Saturday. The crowd of family and friends, which included Cibrian's two sons from his previous marriage - Mason, 7, and Jake, 4 - were shocked to find out that they in fact had been invited to the wedding of the two stars. This trip down the aisle, the second for both stars, has been marred with controversy, adultery and public scrutiny.

Rimes went from America's country sweetheart to the home wrecker we love to hate after she hooked up with Cibrian on the set of the Lifetime movie Northern Lights. The pair made headlines in 2009 around the globe, at first denying they had hooked up, followed by a confession and two messy divorces. The two further caused raised eyebrows after appearing together in public even though they were both technically still married. Meanwhile, LeAnn's ex, Dean Shermett, gracefully disappeared from public view and got remarried - but Cibrian wasn't so lucky. His first wife, model Brandi Glanville, blasted the pair publicly in a series of television interviews.

Rimes, for her part, has recently spoken out about the relationship with Cibrian. The Great American Country Channel's Backstory: LeAnn Rimes featured the star speaking candidly about Cibrian.

"I know I didn't do it the right way," she said of how she handled news of her affair with Eddie going public. "It got really messy, but I have learned a lot from that and I'm not glad it happened, but I know why it did."

Rimes has taken to Twitter in recent months to defend her relationship with Cibrian, engage in a battle with Glanville and to strike back at critics who attack her ever diminishing figure.