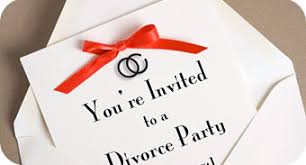 <p>If you&#39;re in the middle of a <a href="http://pasadenalawoffice.com/Practice_Areas/Family_Law_Articles.aspx" target="_blank">Pasadena divorce</a>, you&#39;ve probably heard people around you talking about divorce parties. A divorce party is a celebration of your divorce. The trend was popularized by Christine Gallagher in her book &quot;How to Throw a Divorce Party&quot; as a way to eliminate the stigma that surrounds getting a divorce. It has been compared to shiva in Judaism -- a way to share happy memories of the departed and to celebrate what is yet to come.</p> <p>If you want to throw a divorce party, the most important thing to remember is that you need to have the party after your divorce is finalized. You do not want your soon to be ex finding out about the party from a mutual acquaintance and using it as a reason to put up a fight during the settlement process. There is also the possibility that you might choose to not go through with the divorce, which would create one extremely awkward scenario to explain to the partygoers.</p> <p>The tone of divorce parties varies from person to person. Some are a laid back night with a few close friends, while others are a big bash on par with a wedding reception in terms of cost. Las Vegas is considered the &quot;divorce party capital&quot; since many new singles plan a vacation to celebrate this event in their lives.</p> <p>One interesting trend in divorce parties is having the couple host the party together. If you were lucky enough to have a friendly divorce, this could be a good way to reassure family and friends that you are both OK with the end of the marriage. If you keep the party family-friendly, it might even be a way to help your kids cope with the divorce.</p> <p>Finding someone to plan your divorce party is likely to be a little trickier than finding a Pasadena divorce lawyer, since not everyone who ends their marriage plans a party to celebrate. Look for general party planners in your area or order themed decorations online from one of the many websites specializing in divorce party supplies.</p>