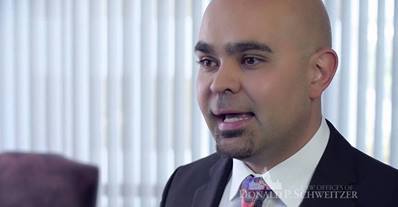 Patrick Baghdaserians has a secret that helps him quickly settle divorce cases that sometimes have languished for years in the care of other lawyers: he prepares for every single case as if he is going to trial.

Baghdaserians, an associate family law attorney at the Law Offices of Donald P. Schweitzer in Pasadena, said conducting “diligent discovery” is a part of knowing everything about a case – especially locating the other spouse’s hidden assets – and his skill at finding those assets gives him the edge he needs.

Baghdaserians shared a case he handled last summer, which was previously held by one of the largest family law firms in Beverly Hills. The client had spent $250,000 and waited for more than two years but little progress towards a resolution was made.

But after Baghdaserians got the case, settlements were made within six months – and both parties were left happy.

“We’re talking 10 pieces of property, millions of dollars and countless claims of separate property by the opposing party. And fortunately for my client, these claims were finally dropped. Why? Because through filing motions and putting the pressure on, we made them put all their cards on the table,” he said.

The graduate of Southwestern University School of Law attorney said he preferred his cases settled out of court not only because it’s more cost effective but it is more likely that favorable resolutions can be achieved, but also because in most family cases, children are involved. The stress of court cases can be psychologically damaging to youngsters.

“I believe it’s important to put that in perspective for the client,” Baghdaserians said. “My job is to make sure there’s more smiles on both sides. Not just on my client’s but on the opposing side too, because the best type of settlement and divorce resolution is one that everybody can live with.”

But for those who do not want to settle the case and pursue a court trial, Baghdaserians has only one game plan: “Put his gloves on and fight for his client.”

Baghdaserians handles many multi-million dollar cases that involve financial discovery, business and real property valuation, and retrieval of hidden or omitted assets. However, regardless of the case size, he gives each client the same attention to detail with the goal of obtaining the best possible outcome.

He pointed out that it is not the money that drives him to work on each case, but the drive to see its successful resolution.

“My goal is to get my clients everything that they deserve to move on with their lives,” Baghdaserians said.

Baghdaserians requires his clients to be honest with him.

“The most important thing for me is honesty. If you’re not truthful to your attorney, then your attorney can’t properly represent you,” he said.

Baghdaserians graduated from Loyola Marymount University and later entered Southwestern University School of Law where he received extensive courtroom experience from the Honorable Robert M. Takasugi, in the Federal District Court for the Central District of California.