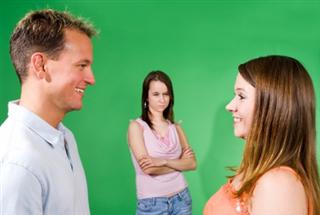 Chrissy was married to Chuck Strickland in 1996; the couple had a son in 1998. During divorce proceedings in 2007, Chrissy described her marriage as good, if not perfect, while Chuck admitted that the couple had more than their share of ups and downs. During a tumultuous camping trip, Chrissy left with their son Wilder after several hours of arguing with Chuck. After her exit, Chuck befriended fellow camper Melissa Simmons, who was on vacation with her then-husband Lane Simmons. After the tents were taken down and everyone returned to their home lives, Chuck and Melissa continued to talk over the phone and online. A total of 158 calls between the pair were made in an eight-week timeframe. Both Chuck and Melissa confessed to their spouses that they were in love with one another. Both couples separated on September 17, 2007.

Chuck and Melissa each testified that they did not sleep with one another until they were separated. But Wilder testified that he saw them in bed together over the summer and Lane said that he found a contraceptive sponge in their bathroom despite the fact he had undergone a vasectomy. In 2008, Chrissy sued Melissa for alienation of affection and intentional infliction of emotional distress. Last week, the trial court ruled in Chrissy's favor. She was awarded $87,550 plus $500 in punitive damages.

The Mississippi Court of Appeals ruled that Melissa was to blame for dissolution of the Stricklands' marriage.

"Notably, the cell phone records show that Melissa called Chuck more than twice as much as he called her," Judge Kenneth Griffis wrote for the court on Nov. 29. "A few months later, Chuck abandoned the marriage, saying that he was in love with Melissa. Based on these facts, there was sufficient evidence for the jury to infer that, but for Melissa's active interference, the marriage of Chuck and Chrissy probably would not have ended."