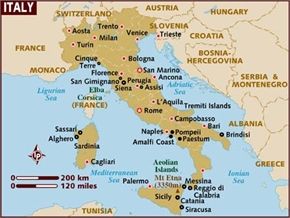 The typical Italian divorce can take up to five years to be finalized, and the process in the very-Catholic country is famous for being complicated, expensive and exhausting. The solution for Italians in a hurry to dump their exes? Travel to Romania. Officials and lawyers say the number of couples who are getting divorced abroad has exploded over the past several years. Wannabe Italian divorcees who journey to Romania are taking advantage of European Union legislation that recognizes divorce granted in any member state.

"After obtaining foreign residency, they can in most cases file for divorce after six months, bypassing Italy's mandatory three-year legal separation," the Times reports. "Romania, in particular, has become a destination of choice for divorce tourists, according to people who work in the business, who say it is quick, inexpensive and seemingly flexible about residency formalities."

As to just how many Italians are divorcing overseas, it's hard to tell as Italy keeps no updated totals of foreign divorces. But some guess 8,000 couples have obtained divorces in other countries over the last five years.

Italy's tangled and dated divorce laws, coupled with the ease of divorces in other parts of Europe, "have created a niche industry" according to the Times. But an easy divorce doesn't come without a risk. False residency can be illegal and busted couples could face fines, jail time or other penalties.

Still, many Italian longing-to-be-non-couples would rather face those potential consequences than go the through their country's long divorce process. Italy's three-year separation period - which was five years until 1987 - can sometimes stretch a divorce proceeding into a 10-year process... especially if the split isn't consensual.