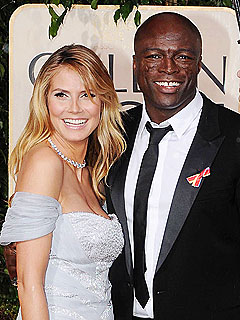 When a regular person is filing for divorce in Pasadena, chances are they don't have to worry about the world watching their every move. But when a celebrity even thinks about filing for a divorce, all bets are off. Over the weekend, the Internet exploded with rumors that supermodel and Project Runway hostess  Heidi Klum was filing for divorce from singer Seal. By Saturday night, though, sources close to the couple said the pair wasn't headed for divorce - at least not just yet.

Within 24 hours, Klum and Seal went from Hollywood's cutest couple to the latest power pairing headed for divorce and finally to a couple trying to work out their differences. A source close to the couple told People magazine, "They've been fighting a lot lately, but they have no plans to announce a split right now. They're not divorcing. They seem to be doing a lot better." When rumors of a breakup hit the Internet, fans were shocked as Klum and Seal (whose real name is Seal Henry Samuel) always had appeared to be one of Tinsel Town's most in love couples. In fact, the pair often renewed their vows in elaborate ceremonies in front of hundreds of guests.

Other news outlets, however, were reporting that trouble for the couple had been brewing for a long time. The Sunday Mirror and TMZ.com have both talked to sources who say it's Seal's hard drinking and partying that are causing the couple to break apart.

"When they had their holiday in Ibiza last summer, Seal hit it hard, was out at clubs and with his friends a lot and Heidi was left with their kids trying to enjoy herself. The cracks were appearing and everybody was talking during that trip. He seemed off the rails," one insider told the Mirror. "They've spent a lot of time apart too on work assignments and that hasn't helped matters."

Yet as we've seen in the past with celebrity marriages, more will be revealed in the days to come as Seal is expected to make several television appearances in support of his new album.

The couple was married in 2005 and have four children together.