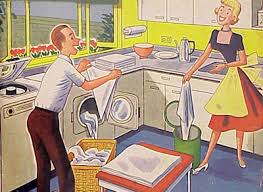 Couples filing for divorce in Pasadena often find themselves looking for an answer to the question, "What went wrong?" when describing their split to friends and family. If there was no obvious trigger, such as infidelity, finding a way to explain the decision to divorce can be difficult.

One recent Norwegian study found that couples who share housework are 50% more likely to file for divorce. While the results of the study are certainly interesting, the researchers did state that it's probably not the act of vacuuming itself that makes men want to get a divorce. Generally, couples who share the housework have much more "modern" attitudes towards marriage. Often, this means that they simply don't see marriage as a sacred contract. If the marriage doesn't meet their needs, they don't remain married out of a sense of obligation.

The women who ask their husbands to share domestic chores are more likely to have a college education and to work in professional level jobs outside the home. They value their independence greatly and are not economically dependent on their husbands. This makes them less likely to want to stay in a marriage that is not working, because they can easily live on their own.

From the man's perspective, not having clear-cut roles for the husband and wife can be confusing. A man who was raised to believe that the best way to make his wife happy was to have a successful career that allowed him to provide for his family could be hurt and confused when it seems like the rules have changed on him.

Regardless of your reasons for wanting a divorce, protecting your legal rights throughout the process of ending your marriage is a smart move. An experienced Pasadena matrimonial law attorney can help you get a settlement that will make it as easy as possible for you to begin the next chapter of your life.